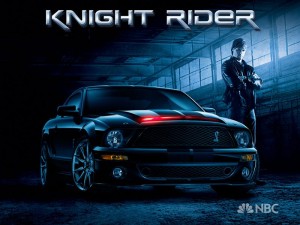 I was a HUGE fan of Knight Rider back in the day and I just saw the premiere of the new 2008 Knight Rider series. I’m not sure why, but they’ve tried rebooting this franchise several times now and they just keep missing the mark of what made the original so cool. It was a guy, a car and some intrigue (and ladies to boot). It was one man making a difference, not a team of lame Hollywood hipsters auditioning for a guest spot on the Hills.

To me, the new version is a glossy bubblegum reboot lacking in just about any substance. I use Battlestar Galactica as an example of how to do a reboot right. Take the core elements of the original, update them for the modern generation, and then add some realism to make it relatable to the audience. Thus far, the new Knight Ride does not of this. It just seem transparent, putting the look and gimicks of the show over any type of character devleopment or substance.

Now to the most important aspect of the show, the car. First, they made it a Mustang? Ugh. Guess Ford won the endorsement sweepstakes this go around. And Gm already used their new Camaro reboot in Transformers last year. Then there’s the cars “transformations”. While the switch to combat mode in the premiere episode was sort of cool (thought a little too “Fast and the Furious” wanna be for me), the car transformation into an F-150 4×4 was a little ridiculous.I get the “nano technology” angle, but this is Knight Rider, not Transformers guys.

Speaking of that, the producers should have taken a note from Michael Bay and brought William Daniels back to voice KITT. Instead they tapped Val Kilmer whose about as boring a voice as you can get. Sorry Iceman. Note to the producers, less dialog and better voice would help a lot. Overall, the car looks cool enough, but it needs more substance. Will Daniels brought life and added humanity to the original series. Kilmer adds nothing for me personally.

What else stick out in my mind? The home base/computer lab with almost 100 people running around aimlessly was also a little pointless to me. They also put two beautiful, if completely vacant and talentless people up to star as Michael and his female sidekick (I don’t even remember her name) so there’s human eye candy but that does little to help the aforementioned substance issues.
It looks from the premiere that they’re dumping a bunch of money into the new KITT and the shows special effects in general, but with a lame duck star, a transparent cast of characters, James Bond meets the transformers storyline and a style over substance writing approach, their missing the mark yet again. The fact that KITT only transforms into Ford vehicles gives me the feeling that Knight Rider may very well end up being this years Bionic Woman for NBC. Maybe J.J. Abrams or Moore and Eick can be tapped for the next reboot for n a few years.