Reading Zach Holmans (@holman) blog piece Only 90s Web Developers Remember This really was a fun trip back to the long gone yesterdays of the younger and emerging web. And by that I mean the hell that was the webs primordial soup of constantly shifting standards (or to be more accurate, a complete lack thereof), intense browser competition, daily technical reinventions of the same pieces of JavaScript code and utter and complete lack of competent and reliable resources to learn what kind of mess we were actually getting ourselves into.

There were some spot on examples of things we dealt with in Zach's piece that today's new generation of developers, spoiled rotten on cross browser libraries like JQuery, plugin less video and animation support and open source treasure troves like Github, can scarcely imagine. To expand on Zach's list, I've thought of a bunch more that always take me back to those glorious days of dial up modems and lost hours of my life trying to get onto AOL (damn you Mac vs PC chat room!). 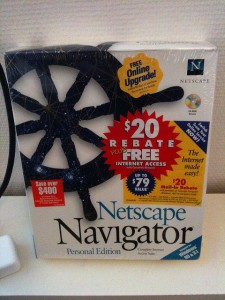 Netscape Navigator. The name alone brings to mind the prestige of the Web's first benevolent dictator and painful memories of its sad and painful demise. Yes, its death gave rise to the Mozilla Foundation, FireFox and the birth of the modern web so many take for granted today, but living through its rise and fall created quite the headaches for us developers back in the day.

When I first started coding, the concept of “free” software was in its infancy. And like with so many things in the world of being a computer professional, you needed software to do the work. As a developer in the early web, you HAD to use Netscape because it was THE MAN in terms of browsers at that point in time.

Netscape was the shiny new Porsche 911 turbo in your neighbor's Dad's garage while your family was driving a rusty broken down Chevy Vega. Netscape had the new cool new HTML tags, it supported JavaScript and plugins and it had the entire buzz of the burgeoning internet behind it. Sure we had Marc Andreessen's original version of Netscape called Mosaic, but that was the said sad Chevy Vega, even in 1996. No JavaScript or Netscape custom tag support and limited resources to maintain it. Let's face it, chicks dig the sports car (I know because I've owned two black sports cars I my lifetime) so we did what we had to and we coded for Netscape.

In his post Zach reminded me of the infamous "Made for Internet Explorer" logo that arrived with the advent of IE and the onset of the browser wars, but the very cool animated Netscape Navigator logos told your discerning visitors you were not jerking their chain and your site was the real deal. As in "I'm stealing everybody else's cool JavaScript code and center aligning content using the <Center> tag, <blink>ing text, using custom sized <font>s and creating complex unusable layouts using <frame>s! Aren't I cool?"

Of course, if you were hooked into AOL's WareZ underground and had a handy copy of Fate or AOLHell, you didn't actually need to pay for Netscape. But I wouldn't know anything about that. Seriously, I don't so don't ask me.

Speaking of animated GIFs, before the Flash Player became as ubiquitous as YouTube cat videos are today, the way to add some quick pop to your budding HTML Masterpiece (or master mess depending on your skillz or lack thereof) was the wonderful GIF 89a. Many a crappy, seizure inducing web site was loaded up from top to bottom with these visual scourges of the early web. Surprise, Surprise we actually have Netscape to thank for this. They added support for playback bits to be read from the GIF89 format that allowed them to be looped, thus creating the webs first feature to be needlessly exploited.

I myself can claim guilt in adding to the treasure trove of these early animations by creating many of my own for my early sites, mostly as a way to prove that I had some chops beyond just coding the page itself and adding some click events. I have many a fond memory of building my first animated GIFs using a combination of Paint Shop Pro (RE: the poor man's Photoshop knockoff) and the Microsoft GIF Animator tool.

NOTE: I'm usually down on M$ products in general (save maybe for Office) but I will say that as far as Microsoft tools go, the MGA was actually a nice compact and straight forward tool and made creating animations quick and easy. And I churned out a few myself in my time.

Years later, Adobe ImageReady arrived gave us a more powerful toolkit until Flash became the true standard for even the smallest pieces of animation on a site. Now we have SVG, the HTML Canvas, PNGs and more. But the glory of the Animated GIF still rings true to me as one of those cool, yet pretty much pointless gimmicks of the webs early days.

For an amusing look back at what some of the worst offenders in this category looked like, see the world's worst web site ever.

You jumped right on the DHTML bandwagon

Early CSS was a neat way to add more control to styling your HTML content and JavaScript was pretty much for button clicks and scrolling text in your browser status bar. But when the browser developers decided to define a standard Document Object Model (or DOM) and combine it with the ability to edit elements on the page in real time, things instantly took off.

Hence DHTML arrived with a serious bang! And wanting to be on the bleeding edge of that curve, we adopted not one but two distinct standards. Why? Because we had no other choice. The browser stats told us we had to treat both IE and Netscape equally back in those days because they at one point had pretty much equal market share.

How many JavaScript functions did you write in the late 90's browser wars that included this wonderful bit of logic?

Now imagine that 20-30 times in a site project. It happened! Talk about bloatware! Thanks to the non-standard difference in their DHTML approaches, we had to code two distinctly different ways to handle everything we wanted to do DHTML wise on our sites. Things got even worse when the W3C recommendations for DOM manipulation hit the web with Netscape 6 and we started to see three distinct types of object models DHTML object models:

Thankfully no other browser in the world adopted Netscape's proprietary Layers philosophy and IE 5.5 adopted the standard document.getElementById() and things finally took a turn for the better. But few people who use JQuery today and did not live through the 4.0 generation of IE and Netscape can scarcely comprehend how amazing a simple $('#elem').html() call is to use today.

You made a Flash intro page

That sound you hear when thinking of this is the sound of hundreds of web site developers taking their sites usability (and credibility) and flushing it down the proverbial internet toilet.

OK, yes I have to claim guilt here as well. I made cool animated intro pages for two of my own personal sites. But hey, everyone was doing it right?

Right? (Someone back me up here!)

Flash intros became a running gimmick fueled mostly by the Flash showcase site Shockrave.com. Getting your site on Shockrave was the equivalent of the getting on the FWA homepage today. And you had to have the coolest, cheesiest, most non-usable Flash site or Flash content you could dare to dream up to give Jeffrey Zeldman recurring usability nightmares.

Thankfully, the smarter amongst us (yes I'm throwing you a bone all you early IA's out there) started condemning flash intros as a useless gimmick and began to instead create animated hero splash areas and then JavaScript rotating carousels. And the rise of Google and site SEO woke site owners up to the lack of real ROI on an all binary Flash movie being the access point for their sites instead of real indexable content. Yes, some will argue Flash eventually became indexable, but the iPad arrived and signed it's death warrant not long after.

But it's still fun to remember browsing to your favorite site, watching all the creative types of Flash pre-loading screens take their time to download and then wasting a few minutes to watch their super cool yet completely useless Flash animation.

I always wonder what ever happened to all those Flash intros anyway. Someone should start an archive I think.

Some other notable ways you know you coded in the 90s:

Now stop reading and go code something we can make fun of in another 15 years!