Open Source web mod for Out of the Park Baseball 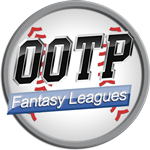 OOTP Fantasy Leagues is a web-based online mod for Out of the Park Baseball (OOTP for short).

It serves as an online stat processing tool for leagues that want to run fantasy leagues using players from an OOTP game universe instead of real-life MLB players. So instead of real-life baseball players accumulating stats in real-world games, the stats come from OOTP players playing in simulated games played by the fantasy league owner using OOTP.

As the game owner (who owns the actual OOTP game and has created the league) simulates games in OOTP, it will take the accumulated stats of these players on the fantasy rosters, tally up the points they’ve earned based on their stats (using each individual league’s scoring system), and keep track of the fantasy team standings in the league. Fantasy owners can scout, draft, add and drop players just like in a normal MLB fantasy league.

Find out more on the Official Web site: http://ootpfantasyleagues.jfox015.com/