I had the fortune of attending Jeffrey Zeldman and Eric Meyer’s An Event Apart conference in Boston. To be able to attend the conference with the leading minds in web design and user experience right in my old stomping grounds of the Boston Back Bay was a real privilege. I expected to learn some interesting things from many of the respected minds in the field, but the conference went beyond that for me. I got to meet some interesting people and it really opened up some interesting ideas and questions on new ways to think about a user’s digital experience. Rather than give a blow by blow of the conference and each speakers talk, I’ll summarize my takeaways from each session.

For a more point-by-point account of each speaker’s presentation at the conference, I highly recommend also reading Jay Wintermeyer’s blog recaps.

Jeffrey Zeldman (@zeldman) is a guy I personally have always had a ton of respect for. He was one of the original champions of web standards during the original browser war when Microsoft and Netscape were fighting to see who come up with the most divergent standard and still somehow get them approved by the W3C. It’s no small stretch to say coding in those days was a veritable nightmare but Zeldman and several others stood up, got in front of the browser companies and lobbied for clear and uninformed standards. He pointed out that no one listened at the time and that different circumstances brought about the eventual adoption standards we enjoy today. Sometimes, he said, good things happen for the wrong reasons. I was very glad to not only hear him speak but to get the chance to meet him in person as well.

Jeff’s opening talk focused on how we has web professionals are often judged and compared (in some cases literally) to those who execute in other more traditional forms of media. It nails the point home that even after almost 20 years; we’re still a highly misunderstood group of professionals outside of our own ranks. Jeff’s main take away is that the web is an art in and of itself and we as the champions of that art need to understand our roles as evangelists for a discipline few people really understand or appreciate. Our job is therefore to loudly and proudly go forth and spread the good word of how we go about building the web and be as involved in as much of the process of web design and development as possible. Because no one can hear what you’re not saying.

The second speaker, Sarah Parmenter (@sazzy) had a very topical presentation on using data to aid in the process of design. Not necessarily “Big Data” as it’s usually tossed around, but data that matters to the user’s experience. The main takeaway from Sarah’s talk was that despite the fact that we are all experienced professionals, we generally spend a lot of time defending our rationale for decisions we make and why. The best way for us to communicate the reason for why we feel something is important when it comes to web design and experience is to use data to back up our assumptions.

Using her start up business The Blush Bar, which is located in the UK, as an example Sarah showed how she utilized analytics and data to shape her business and use technology to better engage with her customers. She offered self-serve scheduling tools on the site as a means to let users customize their own experience, and (no shock here) it worked.

Some of her insights into the efforts she undertook to connect with customers through social media and drive business were also very insightful. It’s also interesting to see how trial and error and making mistakes can shape business strategy as you go along. It raises the interesting question of whether a strategy can be as flexible for larger companies like Starwood as it is for Sarah’s startup Blush Bar business.

I expected Dan Mall’s (@danielmall) talk on Responsive to be a bit more focused on the process of responsive design itself as well as an approach to the implementation. Instead he ended up talking first about a smart approach to solving the classic Waterfall -> Agile methodology switch. His approach of adding focal points where the team is all engaged and then tapered engagements over the life of the project was very interesting. We talk a lot about getting the right people involved at the right places in project life-cycle but never so much the when and to what extent that it makes sense for the budget so this was interesting. He also talked about a smart approach to engaging a client on a new project and smart ways to create a better design process through four steps: Plan, Inventory, Sketch and Assemble.

One of the more interesting takeaways was having the developers involved in the very early conception phases and having them build small focused prototypes that solve small problems and build on them over time. Combined with the designer’s wireframes and a concept of element collages, it made for any easy way to assemble larger layouts and templates based on a combination of all the pieces and prototypes already created. 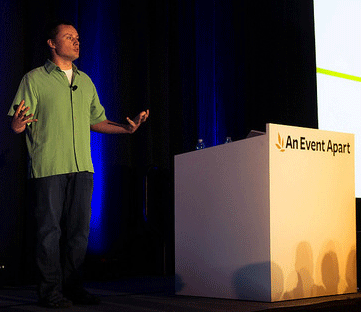 One of the more interesting talks came following lunch Monday when Luke Wroblewski (@lukew) talked about device screen sizes and resolutions. This was actually a bit of an eye opening talk. I hadn’t actually realized that thanks to recent surges in smart phone resolutions, a 5″ smartphone packs as many pixels into its screen as an 27″ desktop monitor. That’s kind of mind blowing to think about. Add in the new ultra HD 3840×2160 and 4k resolutions and it’s easy to see where device resolutions will be headed next. While most devices fall into just the HD category now, the propensity of both larger, denser screen resolutions and the ability of users to adjust the orientation of those screens calls for new thinking when we’re designing and also constructing our CSS for sites.

Luke also touched on the fact that we as developers can’t assume that we have or don’t have an input type available based on the reported screen width. So using media queries to turn support for touch or swipe on or off is not really a reliable option yet. Luke said “screen size is a poor proxy for input but says unfortunately, it’s all we have (for now)”.

Another interesting part of the talk covered how NetFlix went about designing its interface across all its supported screen types using a methodology of viewing distance. It was interesting to learn how they handled the different challenges by assigning a different person based on the viewing distance of the screen to the user. In this day and age where you can’t afford a second chance to connect to your user, it’s a gamble that obviously has paid off rather well.

I’m now kind of disappointed that I didn’t attend Luke’s mobile workshop on day 3, but at least there were a lot of takeaways from this session to really kick start important discussion on the future of mobile. 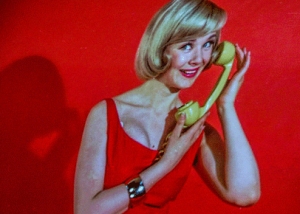 Renowned author and content strategist Kristina Halvorson (@halvorson) had what I thought was one of the more engaging talks of the day discussing how to build a good (and most of all viable) content strategy. Discussing her entry into the world of content strategy consulting and how her recommendations usually came off to the client as “your business is good but you’re ugly and you’re people suck”, she covered five main points in defining a good content strategy:

The biggest takeaway from Kristina was that too much process and bureaucracy and structure can be a suffocating system that ultimately decays the experience of the overall web site experience. She was the only speaker to also throw in a flame transition to highlight how adding a content strategist to a bloated and complicated agile workflow for one client completely blew up the entire process. Nice touch there Kristina! Another example of the idea of simplicity being an effective tool in content strategy was the UK.gov web site redesign which illustrated how keeping the plan simple can generally be a big win for the user and the business overall.

Jeffrey Zeldman introduced the final speaker for day one, Jared Spool (@jmspool), as “the closer” and he did indeed close out day on a high note. Jared focused on one central theme:

His point being that you don’t design something, be it a business strategy or a web site, without some type of intent behind it. He showed two examples where the intent of design paid off:

A big loss he pointed out was Apple’s disastrous iOS 6 maps launch. He highlighted they had a design in place, buying several companies and merging 10 sources of map data, but that they failed at launch because Google had already spent ten years refining their maps into a mature product. This ultimately caused Apple’s product, and all its initial flaws, to be judged against Google Maps which already had invested tens of thousands of man hours in fixing it’s accuracy to the point that Apple’s map launch came off as a comical failure in comparison.

Another interesting comparison Jared presented was how Amazon operates compared to brick and mortar retailer Best Buy. He highlighted how Amazon’ business strategy was designed with the intent to make money even while selling items at cost, giving them the clear price advantage in the marketplace. He also showed how great content (a nice tie-in with Kristina and Dan) can help drive online sales and drive business models that don’t require site owners to include the great scourge of the internet, online advertising! Can’t say I disagree at all there and the numbers he showed (0.01% of online ads ever getting clicked on) firmly back up his assertion that ANY other business model but advertising is a good one.

One highlight for me was Jared’s inclusion of the South Park underpants gnomes as a way of highlighting poorly design business strategies (pretty much all of Silicon Valley, though specifically Twitter was used as a major example). Thanks Jared. At the end of the day, you can never go wrong talking about underpants.

And that wraps up day one. Read my recap of day two.